There are occasions where MN GhostBox is asked to appear on other programs for interviews. We love these opportunities and are always available to take part in them. If you would like either Greg or Nicole (or both) to appear on your radio show or want to interview us, please contact us HERE.

This page is dedicated to MN GhostBox appearances on other series.

Greg was honored to be asked to be a guest on the Paranormal Round Table hosted by Chad Stambaugh. This series is found on the ParaSpeak Radio Network. www.paraspeakradio.com. This was a fantastic program with Chad and Greg speaking extensively about the spirit box and how it is used. Greg opened up in great detail about how he prepares himself for an investigation using the spirit box and what he does mentally to get ready to communicate with spirits. This hour-long show goes by very quickly and Greg hopes that Chad had as much fun with the interview as Greg. 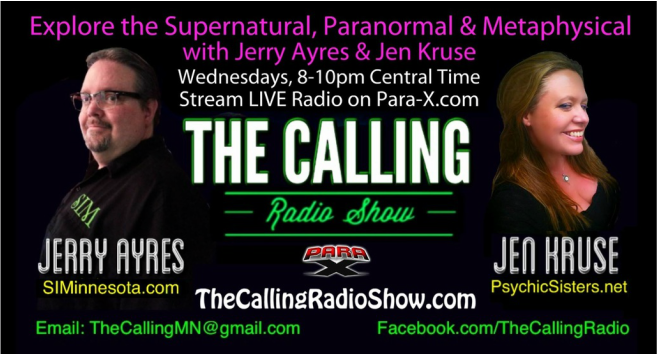 This is the first time that Greg Bakun from MN GhostBox appeared on Para-X just a little while before he started to broadcast on that network with his own show. The Calling is a radio show hosted by Jerry Ayres of SIM (Supernatural Investigators of Minnesota) and now also Jen Kruse who is a holistic healing expert. This show looks at a lot of the evidence that Greg had captured on his spirit box over the previous year.

Scott Freeland reached out to Greg Bakun in August of 2014 to appear on Scott’s new podcast. This came about because when starting to put his own AUDIO INVESTIGATION series together, Greg put an ad on Craig’s List to try and get people to let him investigate their haunted location.

Scott saw this ad and reached out to Greg to do the interview. What Greg didn’t realize until they were just about to record is that Scott is quite the skeptic on the paranormal. This made for an interesting interview. As it was Greg’s first interview about working in the Paranormal field, it is something he is not overly happy with yet includes it on this page for completeness sake. Scott has a go at Psychic Mediums which is his prerogative but Greg has always felt bad that he never did more to stand up to that stance.