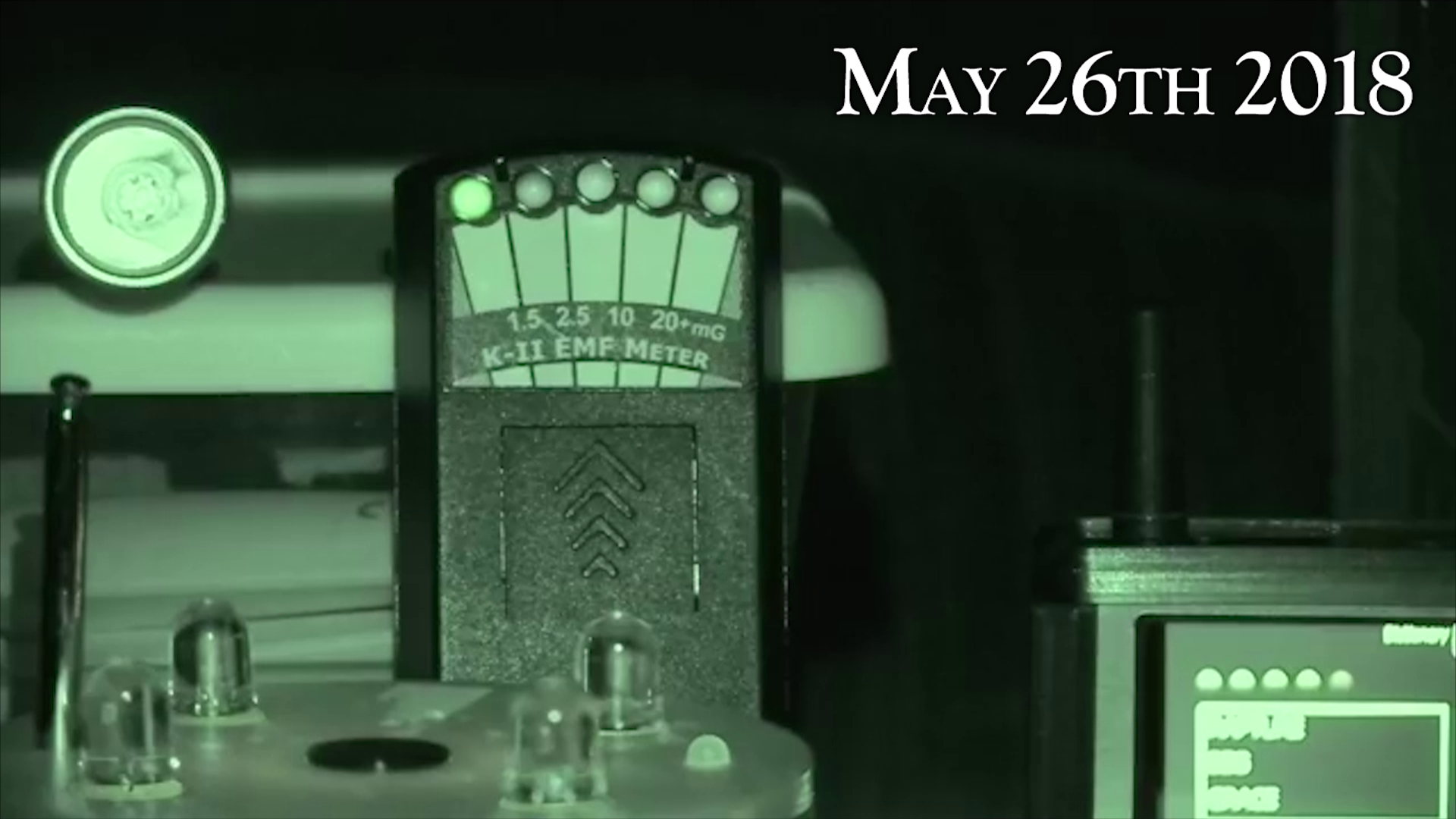 Here are the highlight spirit box responses to our May 26th Live Facebook Spirit Box session. I think some of these responses are exceptional and I feel they get better as the session goes along. In fact a spirit even says Facebook at one point.  Please listen to all the highlighted clips below because it shows how the session got better as it went along.

The entire Facebook Live video is located at the bottom of this page and also on YouTube.

Words from the Ovilus V this session:

One of the first messages to come from this spirit box sounds like a women telling me or someone to get in here!

It’s a very strange way that the two words “Left Feet” are said. Definitely not from a radio.

Can you give me a name please? John

The name name “John” comes through almost as part of a radio broadcast. What do you think?

Should we be preparing for the Rapture? Don’t miss it!

As you will see, on the Ovilus V, the word “Rapture” came through. I asked if we should be preparing for it and what is obviously part of a radio commercial responds “Don’t miss it!” but is it a conicidence, some spirit with a sense of humor or a warning!

A spirit saying “goddamnit” about something or the radio running through to sound like it.

I thought the name Jerry came through one of the Ovilus’ but I was wrong, it came through this spirit box and some one in the chat was asking for Jerry to come through. He did!

This is an incredible response. Tonya in chat mentioned that this came through. I didn’t hear it but when you listen, it is said fast but concise. Not from the radio but some woman who wanted to get her message through to us.

So, I am looking for spirits…..Hi!

When I am asking my question, someone breaks through to say hi.

A great response. Listen closely as the N starts a few beats ahead. This response is so defined and floats above the white noise.

Someone asking how I am doing and at the same time the KII goes off.

I ask the question, as it Memorial Day weekend, what Airborne Parachute group my Dad was in. The answer sounds like 100 which would be incorrect, it was 82nd.

The Ghost of Alvin the Chipmunk

This is really odd. Listen to how sped up this was. Not a radio signal.

When I do these sessions, there are some words I do not like to come through. Back to back, I get “Pray” and then the word “Demon” comes through. This overall session had some words I was not thrilled to receive and “Demon” was one of them.

We get names that come through and I don’t remember if there was a Matt at the Facebook chat or perhaps it was a spirit giving his name.

Perhaps a random word but one that comes through so clearly.

It is said really quickly but it sounds like a woman saying it.

Death and A Death

Here are two times the word “Death” comes up right after each other. Once again, not great.

Did you hear “Death” twice? Yeah!

I was asking the chat room if they heard the word “Death” come through twice and the spirit box answers me, “yeah”!

A random word that came through but very clear. Perhaps it was a spirit answering my question of how many spirits are in the room from earlier!

Let’s get off the subject of death. Done!

I ask the spirits for us to get off the subject of death and a spirit responds saying, “done!”.

I’ll kill him and demon

Another not so great message from the spirit box. We hear, “I’ll kill him” and then what appears to say “and demon” but is that what it says? What do you think?

I female who says, “I know!”. Listen to how her voice lingers a little bit after the “know”. Definitely not radio interference. A wonderful EVP.

Nicole, are you here? I am.

This is interesting. Debi in our chat wanted to know about her friend Nicole. We ask if Nicole is here. The response I here is “I am” and “here” but as two different voices. This is not uncommon for a spirit box response and I think it is really incredible!

Nicole, are you still here with us? Yeah!

I ask if Nicole is still with us and she says yes. The answer isn’t immediate but it comes. Spirits don’t always answer immediately.

I love this! Very clear and makes me think that the spirits know that there were other people tuning into the session via Facebook and one was saying hi to us all.

This next session is interesting. Sue on the chat was asking about Lou or she heard Lou. In these clips, it starts to look like that Lou is my grandfather Lou Kokesh who died before I was born. If it was him, I feel like this answers a lot of questions for me as to why this session went the way it did.

Asking for Lou. She knows.

Sue in the chat is asking about a Lou. The response is, “she knows”.

I ask someone to say my name and my name comes through pretty clearly.

I wanted to know who was saying my name and the very clear response that came through was “Lou”.

Not my grandpa Lou, right? Hi there!

Once I realized it could be my grandpa I never met, I asked if it was my grandpa and the response I got was “Hi There”.

I ask for clarification and the response was “like it” and “yeah”.

Perhaps a random spirit who saw we were doing a session came through to wonder what year it was?

The name “Robert” comes through again. You will have noticed it also came through the Ovilus V in this session too. I think my response is funny.

Is that a spirit named Robert? Kind of.

This response is a little troubling for me. The name Robert has been appearing regularly in my sessions since 2014. I ask if Robert is a spirit and the response is “kind of”. What does that mean? It’s vagueness is not great for me and perhaps is a bigger clue to who he is than I thought.

What a great response! We are doing a live session on Facebook and a spirit knows that is what we are doing! This is incredible!

Did you hear that? Yeah and Yeah!

I was so happy to hear “Facebook” come through, I am asking the folks on the chat if they hear that but it is the spirit box who answers twice with “yeah” and “yeah”! Very cool stuff!

I include this because there was an Adam in our chat earlier and his name came through!

Jannie, are you here?

Lisa in the chat asked if we could get a hold of Jannie. She comes through right away with a “yeah” and as you can hear, it takes me by surprise.

Perhaps a spirit or Jannie asking about what something is? Maybe my equipment?

This is Lisa’s name come through. I can’t help but think it is from Jannie.

Not as clear as the first one but I believe this is Jannie trying to talk to Lisa again!

Was there a Todd in chat? Maybe it’s a spirit talking to another spirit named Todd?

Here are two words that came through. Each word is the same voice saying “Heaven” or “Evan”. What do you think?

This is a great name that came through “Mary Jo”. Listen to the end with “Jo” and how it trails off after a while. That would be going across multiple sweeps. A great response!

Full video of the Facebook Live session. The entire Spirit Box session from May 26th 2018:

We dubbed this session, “The Mother’s Day”edition because, well, it happened on Mother’s Day and we all wondered if we could possibly contact our loved ones. Unfortunately, due to operator error (I admit it!) the audio recorder I was using did not record the majority of this session. The audio is intact on the full video which is available at the bottom of the page but that is not as good as my recording to pull out pieces of evidence.

This was the first set of words that cropped up after the recording started again.

One of our Facebook Participants, Dawn, ask for her Grandma Mary to come through which I did the asking. The response was a woman who asked, “Who’s there?”

It comes through really fast with a woman who says, “I can cope”. I am trying to get a clean slow down of the file to hear it better.

Just someone who says “people”. Although it may not seem remarkable, it is a two syllable word that goes over multiple channels on the spirit box.

Anyone who knows me or have listened to me do these before knows that Robert’s name comes up on the spirit box with me often. There is a Robert who lives in my house but this may be someone else as the frequency of him showing up is often. Here is also another example. Click HERE for that example.

Can I have your name please – Abel

It’s not super clear but it is my belief that this says “Greg, Hold On”. I’m honestly not one of those guys who hears he name in all the recordings but that’s what I think this is.

Full video of the Facebook Live session. The entire Spirit Box session from May 13th 2018: